Swiss-Belhotel Maleosan Manado
Подробнее
Чистота
8,8
Комфорт
8,8
Адрес
8,3
Сервисы
8,4
Персонал
8,8
Общий рейтинг: 8,5 Превосходно
Оценка по 98 отзывам
Все отзывы
Чистота
8,8
Комфорт
8,8
Адрес
8,3
Сервисы
8,4
Персонал
8,8
Превосходно 8,2
Плюсы: I have stayed at several hotels around SE Asia, while Swissbel Manado is not the best I have ever experienced, it is great compared to Indonesia hotel standards. However, it is pricey. I stayed in the Deluxe room - with taxes and fees about $74 per night. The food is quite pricey as well. However, since the rooms have a fridge and a kettle, you can always grab snacks, drinks, and noodles from the market across the street. But the food they have IS tasty and you should splurge on it. The breakfast was delicious and had many options: pastries, fruit, cereal, Indonesian dishes, salad, eggs, fresh bread, and a large variety of juices. And everything I ate was delicious. The pool was rather nice, when children were not playing in it (as with all pools) and they will bring food/drinks to you while you relax. I also got an Ayurvedic massage and it was amazing. The staff is also helpful, and found a place for me to buy certain research supplies in town. The wifi is good (I was on the 7th floor - each room has it's own dedicated router), but not Netflix good. It takes about 3 times as long to stream anything online. This is not a bad mark on the hotel - I didn't expect anything other that this situation. However, i know that some people are curious how good the wifi is.
Минусы: I would suggest you not buy pastries from the Swiss Cafe in the Lobby. I bought a cake and it was definitely not fresh. I was told they had been made the night before, however considering the cakes were all in the same spot from three days prior, that comment is suspect. BUT - they felt so bad that they later brought me 3 slices of cake to my room, all of which were fresh. So at some point the cakes here are good and are fresh. Also, as others have said, only a few staff speak English, but this is not the fault of the hotel. You are in a remote part of Indonesia and it is difficult to find people who know the language. Yes, it would be nice if we could communicate more effectively, but for the most part I got along just fine with my broken Bahasa.
Нормально 5,7
Плюсы: Comfortable, staff friendly, room tidy.
Минусы: Ants in the room, refrigerator not working (but staff exchanged for another) and the 4hr city tour was expensive. not value for money. We could get same package outside for less than half the price! We dare not book any other packages after this. 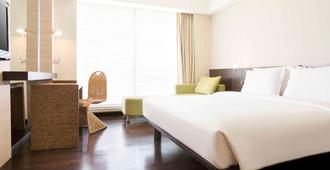